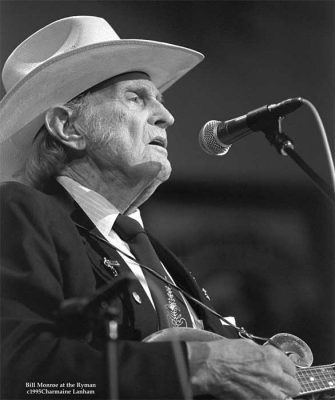 How Love Saved The Ryman

My first job in Nashville was as secretary to George Gruhn at GTR (now Gruhn Guitars) located in its original building across from the old Hatch Show Prints building on 4th Avenue North. My husband worked there too. The GTR shop backed up to the Ryman Auditorium, and as GTR  employees we could simply show up at the famous backstage door on almost any weekend and were permitted entrance. We were pretty much given free range by the longtime guards, Mr. Bell and Mr. Van Dame. Ah… the good old days. . . . I became friends with many top musicians and their families by hanging around that door.

The opening of the new Grand Ole Opry House at Opryland USA in 1974 heralded a hiatus from musical performances at the aging Ryman, a drought which would last for more than 20 years. Roy Acuff, who owned a huge share of Opryland Theme Park and the new GOO  building, wanted a clean break between the Grand Ole Opry performances and the Ryman Auditorium. He stated “I never want another note of music played in that building.” Roy tried mightily to have the building torn down in order to discourage competition. And he nearly succeeded.

John Hartford led the outcry to save the Ryman Auditorium. I recall that in 1974 he wrote a song about rescuing the revered venue, singing it to the staff at GTR among the repair benches and dusty instruments. I can’t find reference to Hartford’s Ryman song on iTunes, etc. — perhaps he never recorded it. I remember nothing about it except the song’s plea to save the building and the genius which characterized all of John’s creative efforts.

By 1991 the Ryman Auditorium was still standing, saved from the “Wrecking Ball”—  but the building was falling apart. Emmylou Harris & the Nash Ramblers took the Ryman stage in its first music show since 1974 on April 30, 1991. Her appearance signaled a resurgence of interest in restoring the dilapidated building. Thanks to the dedication and support of many, on June 3, 1994, Nashville’s “Mother Church of Country Music” reopened as a performance hall and museum. The following year, Bill Monroe helped launch the Bluegrass Nights at the Ryman Series which has been presented every summer month since; the ongoing program has done much to revive interest in Bluegrass music as well as to preserve the revered hall.

When I think of the Ryman Auditorium, I remember John Hartford’s fierce passion to preserve the historic structure. Without his campaign to save it, I believe the Ryman would have been torn down — it could have been a parking lot by now. Oh, thank you, John.

Editor’s note: Be sure to check out Charmaine’s article and photos on Bluegrass Nights at the Ryman.