A Personal Portrait of Bill Monroe

As a photojournalist, I have been privileged to have been behind the lens most of my life. My husband and I — along with three other couples who played Bluegrass — opened the Station Inn in 1974, which over the years has become a thriving performance venue. I shot thousands of rolls of film there and anywhere else good music was found. I now have a collection of wonderful black-and-white photographs of early Country Music and Bluegrass stars and more than a few great color shots as well. This month’s spread includes a few of my favorites of my friend, the legendary Bill Monroe. 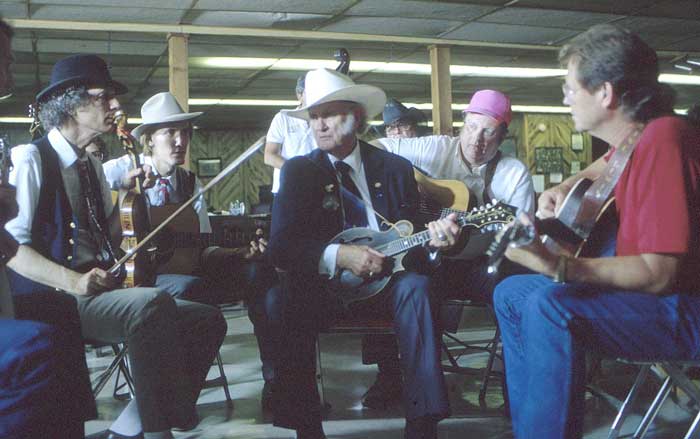 The late Bill Monroe was not only a bold innovator on the mandolin, he was a remarkable teacher. His unique music philosophy was that anyone could play his style of music and he spent his career encouraging multitudes of musicians to do just that. He showed up in music clubs, at festivals and parties, at any gathering of fans and players. Monroe shared his music with everyone who wanted to join the jam session. He was incredibly generous with his time and expertise, spawning an army of faithful followers.

There was nothing more exciting than playing music with him; his mandolin chop created a tension and exhilaration unequalled among musical styles. Bluegrass is an exciting, forward-beat-based musical style which differentiates itself from other genres by its drive or ‘pushing’ against the count. While the rhythm is hard to describe, it’s easily recognized by its fast, straightforward beat. The tempo basically complements buckdancing, a country dance style featuring footwork. Bill began his show business career as a buckdancer in the Southern tradition, so it’s easy to see how that particular dance rhythm became a major influence in his playing style.

I made the photo above during the filming of the 1993 movie called Bill Monroe: The Father of Bluegrass Music. You can see the late John Hartford on the left. The faces surrounding Bill demonstrate the concentration and respect given to him by anyone interested in Bluegrass music. No matter how masterful or experienced a player was, there was always more you could learn from Bill Monroe. 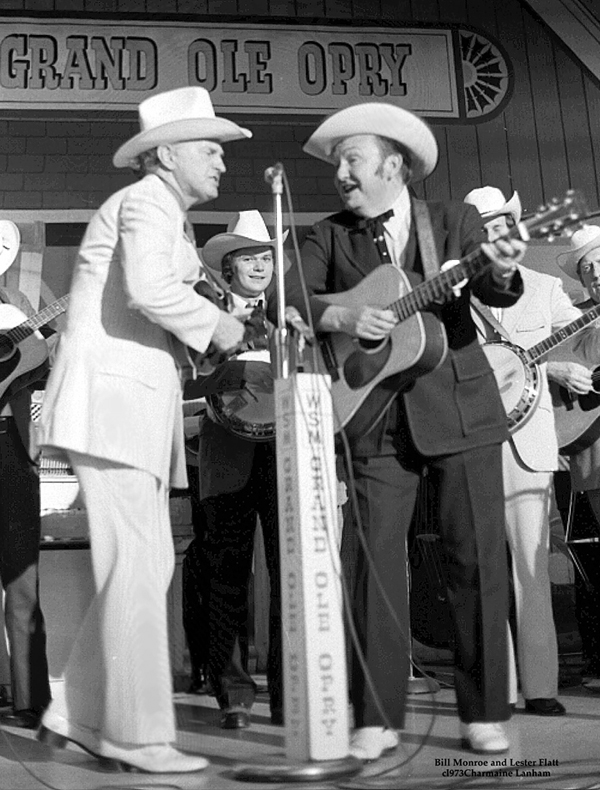 Though he called Bluegrass “my music”, Bill Monroe did not singly invent the style. Music scholars agree that Bluegrass was a spontaneous event which occurred with the serendipitous pairing of Monroe, guitarist-singer Lester Flatt, and banjo player Earl Scruggs in 1946. Scruggs had the crisp banjo rhythm Bill was looking for. Previous to this pairing, Bill was performing in a style folks would consider much more “old-timey” but he was not satisfied with the sleepy, predictable beat of the style of country music he and his brother Charlie played. When asked why that band broke up, Bill replied, simply:“Rhythm.” Once Monroe hired Flatt and Scruggs to complete his band, he had the sound he craved.

Bill and Lester Flatt rarely performed together after their band partnership broke up in the late 1940’s. I took this photo of a rare duet, above, at the Country Music Association’s Fan Fair Festival at the Ryman Auditorium in Nashville in June 1973. 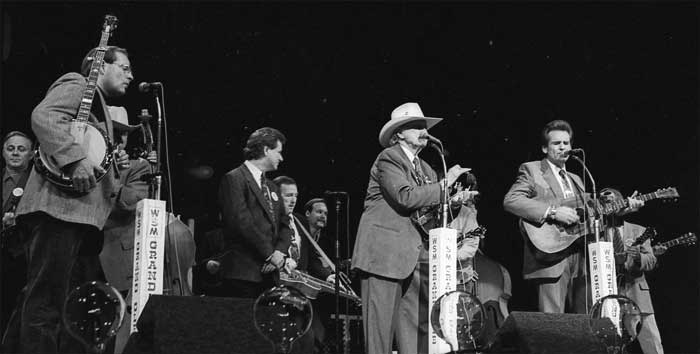 At the end of his Grand Ole Opry segment, Bill always called the performers from all the bands to play together in what he called “finales”. The last song would be played with everyone onstage. He made it a point to do the same thing no matter where he played to honor the pickers. Sometimes there would be up to thirty musicians playing together. This photo from the Opry in the mid-80’s features Bill with harmony vocals by banjo player Alan O’Bryant of the Nashville Bluegrass Band and Del McCoury on guitar. 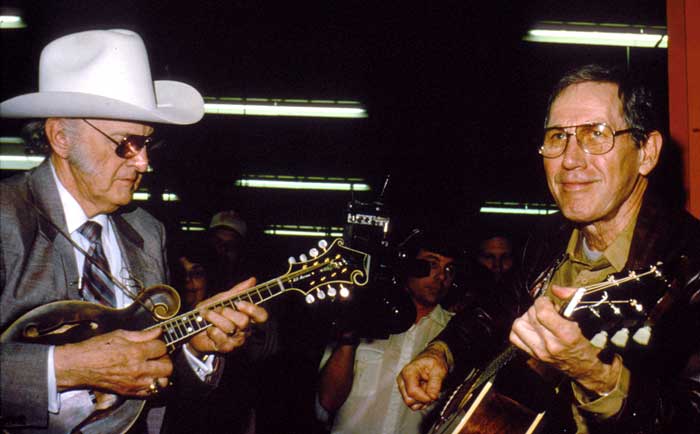 During the 1990’s Bill’s mandolin was vandalized during a home break-in. Although it seemed the mandolin would never be restored, several craftsmen at Gibson Guitar Co. were able to painstakingly put the splinters together over several months time. This photo was made during the ceremony to present Bill with his mandolin completely restored. Chet Atkins was on hand to make the presentation and test out a few tunes.